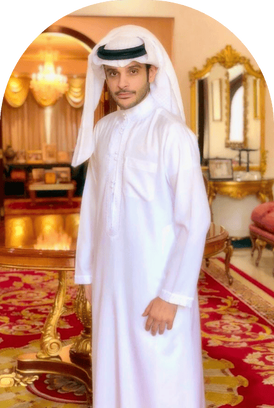 Al Mashael Movies was established in 2005 by H.H. Sheikh Mohamed bin Salman bin Abdulla bin Hamad Al-Khalifa. Having always been a lover of cinema and interested in the movie making process, H.H. set out to discover how to make Hollywood level movies. After producing 3 financially successful movies, we changed the form of the company from establishment to a limited liability company in 2018 with the aim to expand our business and changing the strategy and focusing on delivery high grade animated movies. This was possible thanks for the J/V partnership with Assemblage Entertainment Private Limited.

Within the strategy laid out by H.H. the ultimate goal was to compete with leading streaming services in delivery of quality childrens’ animated entertainment.

Unfortunately H.H. passed away in December 2020 from cancer.

After his sad passing, his family is determined to carry out and execute on his vision.

H.H. Sheikha Mashael bint Rashed bin Abdulla bin Hamad Al-Khalifa is a member of the Bahraini Royal Family and the wife of H.H. Sheikh Mohamed bin Salman bin Abdulla bin Hamad Al-Khalifa. Under the leadership of Her Highness, there is an even greater focus on becoming the premier content creator in the Middle East through strong partnerships, technology, and a relentless focus on quality.​
In 2021 the company finalised an exclusive agreement, with the Evolution & Development Technology Company, (parent Company of the Software 3D Evolution System), covering the Middle East and Asia territories for the transcoding of audiovisual works from 2D to 3D.

Another ambitious vision of Sheikh Mohamed is to distribute films in the Middle East in a traditional way; launch the first SVOD service entirely dedicated to families and children: Kidstime